Please welcome our guest blogger, Jamie Hardt. You may remember Jamie from one of our Families of Lake Country Family Fun families. Come along with her as she guest blogs for us today, guiding us on how to survive your first show / live event, with all its unexpected turns 🙂

How To Survive Your First Show / Live Event

I’ll share with you (in my opinion) a hilarious, comedy of errors day. Then, I will share my tips of how to survive your first live show/event/concert. Prepare yourself for this ride!

It began by purchasing tickets for “The Wiggles” and paying $85 a ticket. Yes, $85 a freakin’ ticket. My only justification of this was it was going to be my one and only child/daughter, Lorelei’s, first show.

Fast forward to the day of the show. Although the intentions were good, this was a very challenging day. It began well as we attempted to let Lorelei use a portable DVD player (the kind that straps to the headrest). This was very successful for the 50 minute drive to Madison. And, that was the last good thing of the day.

As my husband, Aaron, parallel parked into a very tight spot, he must have rubbed on the curb one, too many times. As when we went to get Lorelei out of the car, the tire (4 week old tires by the way, of course!) were flat. After soaking that news in, we decided we would have to deal with it later, and we walked to the theater. Halfway there, I asked Aaron if he had the tickets. After a few choice words (which I won’t type here), he ran back to the car to get the tickets as he had forgotten them in the car. Once he returned, we continued our walk to the theater, and we had 15 minutes to spare before the show began. We were told we could take the stairs or the elevator. We decided for the stairs, however, we weren’t told there were 6 (yes SIX!) flights of stairs. Just a bit challenging for us as we were dealing with a diaper bag, purse, and a 40 pound toddler. Ugh, but we made it! When we got to the theater, we were told we cannot take pictures with cameras, only cell phones. We wish we would have known this sooner. So, there went any opportunity for some quality pictures. Once seated we were good….for a while. 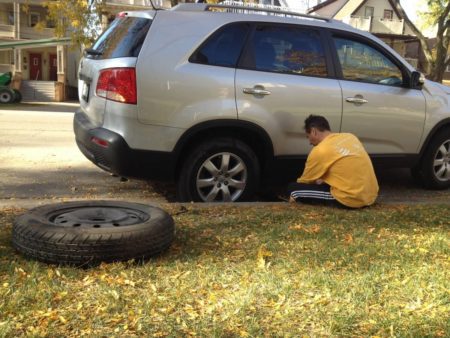 The show began, and Daddy Aaron and Mama Jamie were very excited 🙂 However, Lorelei seemed very confused and not entertained. We tried to engage her and point out everyone, but, nothing seemed to work. They did all the songs she knew, but nothing was happening for her. At one point, Anthony Wiggle wanted to read all the signs that some of the children had brought. And, this is where it all became a downward spiral as Lorelei didn’t bring a sign. We didn’t know. We didn’t think to bring one. Why would we? It didn’t matter that we brought roses for Dorothy the Dinosaur (the silly ballet dancing dinosaur that loves roses). The fact that we didn’t have a sign was the worst thing in the world to our sweetheart.

Then, getting the roses to Dorothy was another fiasco that upset Lorelei as after we gave them away, she wanted them back. She didn’t understand. And, throughout the show, the characters that were mascots would leave and the Wiggles would say they would be back later. However, none of them ever came back!! So, this was very upsetting as we continuously told Lorelei they would be back, but, they were not coming back. The pinnacle point was when Lorelei looked at Aaron and screamed “I want OUTSIDE.” She was done; we were done. He took her out, calmed her down, and they came back in 10 minutes later.

After the show was over we left and walked back to deal with the car. On the walk, I asked Lorelei if she liked the show. She said, “No…it was too loud.” Shocked and heart-broken, we believe she meant overwhelmed, too much to take, and she simply didn’t understand the Wiggles were going to be live and in person. 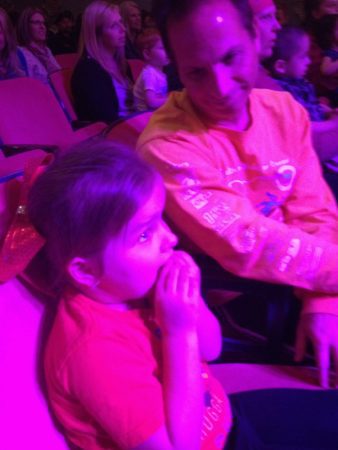 Back to the car…

And, now, the car. It was 2:00 pm and nobody had had lunch. I laid a blanket out, put out some snacks, gave her my phone to play with, and tried to help Aaron by reading the owner’s manual on how to change the flat tire on the Kia. He was successful in the beginning as the tire was underneath the car. And, he would have been successful entirely if it wasn’t for lug nuts being bolted on that not even Superman, himself, could get off. But, to the thanks of a stranger and a cousin that lived nearby, we eventually got it done. (Also, while this was happening, Lorelei told me she had to go potty. So, I taught her how to ‘cop a squat’. I figured every true Wisconsin girl has to know how, right? Am I right?)

When this was done, we promised Lorelei a trip to the ‘ice cream place’ (Ella’s Deli). After a scoop of Blue Moon and a trip on the Merry Go Round, we were ready to call it a day. We decided to put her earphones on that were connected to the DVD player so Aaron and I could just have some silence and talk about what had all just happened. Aaron turns to me and says, that ice cream—that happiness—cost $2.00.

I guess it just goes to show that money and expensive things truly do not buy happiness. 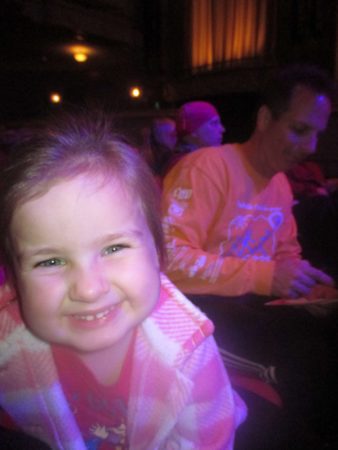 So, it was quite a day and we learned a lot. Here are a few tips that can help make your first outing like this more successful than ours was.

1) Know the Show—don’t just go because you think your child will like it. Go because they are begging to go. Talk to other parents that have gone. We did, so we knew to bring roses, but, we missed out on bringing a sign. Research the show. Know if there’s an intermission, how many songs, smoke, darkness. The more prepared—the better!!

2) Personal Space—If there’s an option, choose a show that has general or open seating. This way they can roam around and not be confined to a seat. If this isn’t an option, do your best to get aisle seats so you can make a quick exit if needed.

3) Intermission—If there is one, then use it to explore, go potty, and have a snack/drink.

4) Is it worth the $$$ ???—If you drop a lot of money on this first experience, and if there is a meltdown, then chances are you’re going to feel forced to stay for the full experience. Sometimes, it’s better to just admit defeat than punish yourselves and the other families around you. As Elsa says, Let It Go 😉

5) Promises—Don’t make promises you can’t keep. I.E. “I’m sure they’re coming back, sweetie.”, “Yes, you can meet them afterwards.” If you can’t follow through, you might be paying for that later.

As the mother of two young children, Erin, takes an active role in the community. She is ever on the go with her littles in tow.